In the wake of the President’s address to the nation on forthcoming US-led action against the Islamic State (IS) in Iraq and Syria, foreign officials abroad and legal scholars at home are lambasting the President for his presumed lack of legal justification.  In a primetime speech on September 10, the President laid out his strategy to “degrade and ultimately destroy” IS.  In short, his four-part strategy includes: continued air strikes against IS targets, though now expanding to Syria; increased support to forces fighting IS, in the form of additional US uniformed trainers and advisors in Iraq and providing of arms, equipment, and coordination for training to forces inside Syria; continued counterterrorism efforts aimed at denying IS necessary logistics and support by working with international partners to cut off funding, stem the inflow of foreign fighters, and countering IS propaganda; and further humanitarian assistance to those displaced by IS.  Although the President claims bipartisan support, he also claims “the authority to address the threat from ISIL.”  It is the airstrikes planned for Syria-based IS targets and the President’s presumed basis for authority to attack IS more broadly that concerns legal experts. 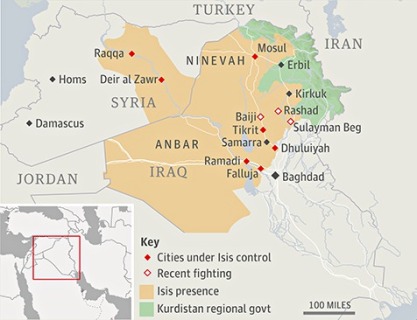 Both Syria and its ally Russia assert that any US airstrikes against targets in Syria would be in violation of international law.  A Syrian government spokesman warned that “any action [against IS] without the consent of the Syrian government would be an attack on Syria.”  And despite ongoing Russian involvement in the Ukraine, a Russian spokesman warned that any US action in Syria absent “an appropriate decision of the UN Security Council, [] would become an act of aggression, a crude violation of the norms of international law.”  Article 2(4) of the UN Charter would certainly seem to support Russia’s assertion of the Syrian position.  And with Russia’s position on the Security Council, a Security Council decision supporting the US strategy is all but impossible.  But, a Security Council decision condemning, or even prohibiting, the forthcoming US action in Syria is equally impossible.  Just as international law has been ineffective in curbing Russian aggression in the Ukraine, so too will it be ineffective in facilitating the efforts of any of the US’s detractors in dismantling IS.  Even if legitimate international law concerns did exist regarding the US strategy for addressing the IS threat, the US interests do, and should, outweigh those concerns (I make this argument here in my law article, on page 192).

More concerning to legal scholars, at least from a domestic perspective, is the President’s claim that he already has “the authority to address the threat from ISIL.”  Presumably, the President is referring to the Authorization for Use of Military Force (AUMF) passed by Congress in 2001 in response to the 9/11 attacks.  The key language of that AUMF indicates…

Since being passed for combat operations in Afghanistan, the AUMF has also provided the legal basis for attacks against al Qaeda, and affiliates, in Pakistan, Yemen, and Somalia.  Just last year Pentagon legal experts defended broad authority under the AUMF when testifying at a Senate Armed Services Committee hearing.  According to the Pentagon legal experts, “the broad interpretation of the AUMF [] gives them the flexibility to deal with the changing threat in a lawful, effective manner.”  Members of the Committee disagreed with the broad authorization assessment, yet no specific solutions were suggested.  Just weeks after that Senate Committee hearing, the President called for a repeal of the AUMF referring to it as the “perpetual war” law.  What he did not call for, however, was a deadline by which to repeal it.  Probably not a calculated risk, but not addressing the “perpetual war” law was a good move in hind-sight. 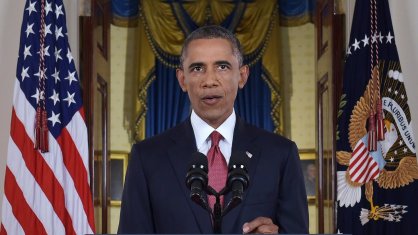 In recent months, the Commander in Chief appeared to be relying on his Article II powers to prosecute the limited campaign against IS targets in Northern Iraq.  This was evidenced by the multiple War Powers Resolution letters sent to Congress keeping them informed.  Relying on this authority for the limited strikes and in light of several AUMFs being considered, if not avoided, in Congress in the run up to the President’s speech, it was no doubt quite a surprise when the President claimed he already had the necessary authority to prosecute a sustained campaign against IS.  Experts question why the President did not insist first on Congressional support, but the President has been down that road only a year earlier when Congressional support for action against Assad’s Syrian regime for their use of chemical weapons on their own citizens was clearly, and embarrassingly, unobtainable.

The President’s justification for waging sustained conflict against IS, reliance on the 2001 AUMF, is a stretch indeed.  But it is plausible.  According to the language of the AUMF, the President determines those persons or organizations that participated in the 9/11 attacks.  That was clearly al Qaeda.  Since that time, the President has retained authority to use that AUMF to attack al Qaeda affiliates in South Asia, the Arabian Peninsula, and Africa.  The stretch, albeit a plausible one, is identifying IS as an al Qaeda affiliate or at least something that was at one time an affiliate of al Qaeda.  IS was born of al Qaeda in Iraq and only recently did Ayman Zawahiri disavow IS.  This same organization, regardless of name, attacked US forces in Iraq during the Iraqi war and continues to carry on the legacy of the former al Qaeda leader, Osama bin Laden.

In the end, the point may be moot if the President can get the Congressional authorization he very much wants, but is very reluctant to ask for.

Clark Smith is a third-year law student pursuing a concentration in International Law. He has undergraduate and graduate degrees in Political Science and International Relations. In addition to being a Student Fellow, he is the Submissions Editor for the Journal of International Law. His previous experience includes work in both security and policy and his previous overseas postings include Western Europe, the Balkans, the Middle East, and South Asia. His professional interests include international development.