On October 14th, 2014, pro-democracy protestors in Hong Kong forced police to retreat from a tunnel previously blocked by additional protestors.[i]  As protestors reinforced their barricades, police returned to the tunnel within hours of being forced out and retook the thoroughfare.  It was during this retaking that protestors recorded Ken Tsang, a social worker and member of the Civic Party, on a fifty-one second cellphone video being led around a dark corner where police began kicking Tsang as he lay on the ground.[ii]  This blog will set forth the origin of Hong Kong including the current provision at issue, the Chinese government’s actions that led to the protests, and international repercussions, if any, of China and protestor actions.  What specifically brought about clashes between protesters and police?  It all began on December 19th, 1984 with the release of Breakin’ 2: Electric Boogaloo. 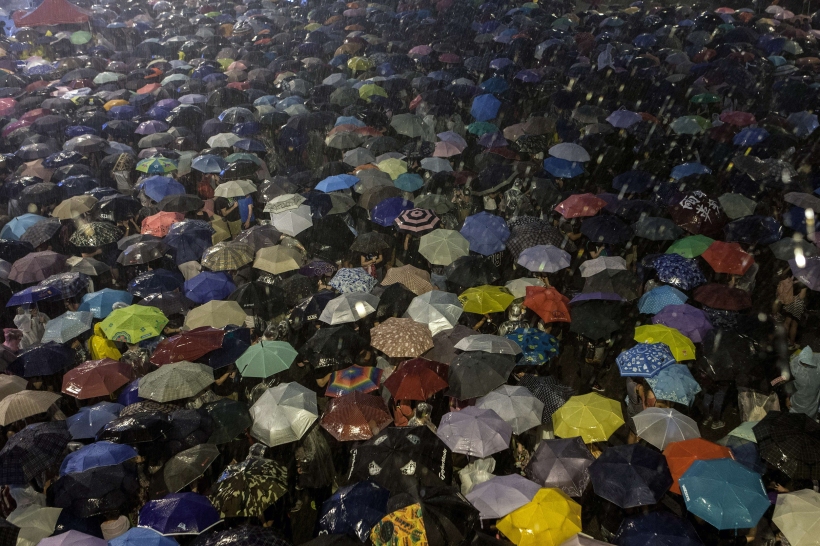 The Government of the United Kingdom and the Government of the People’s Republic of China (PRC) signed the Sino-British Joint Declaration on the Question of Hong Kong (The Joint Declaration) on December 19th, 1984.[iii]  In The Joint Declaration, the United Kingdom restored Hong Kong to the control of the PRC on July 1st, 1997.[iv]  The PRC would not absorb Hong Kong under socialist rule; the “Hong Kong Special Administrative Region” (Hong Kong) would remain an autonomous region under the principle of “One Country, Two Systems.”[v]  Under this system, Hong Kong would retain the capitalist system it held under British rule while still considered under the purview of socialist China.[vi]

As a part of The Joint Declaration, the Seventh National People’s Congress of the PRC adopted The Basic Law on April 4th, 1990.[vii]  Imposing this law on Hong Kong, The Basic Law sets forth the general principles of the PRC regarding Hong Kong, including the protection of rights and freedoms, the political structure, and external affairs.[viii]  The Basic Law also details the method in which leaders of Hong Kong, specifically the Chief Executive, shall be chosen.  Article 45 of The Basic Law states: “The Chief Executive of [Hong Kong] shall be selected by election or through consultations held locally and be appointed by the Central People’s Government.”[ix]

Allowing such a high level of democracy is not characteristic of the PRC as evidenced by the Tiananmen Square protests of 1989, but, per The Joint Declaration, Hong Kong would retain a relatively high degree of autonomy for the next fifty years.[x]  On July 1st, 1997, The Joint Declaration was officially in full effect and the transfer of Hong Kong from the British to the PRC was complete.  Simultaneously, The Basic Law took hold in Hong Kong establishing it as the supreme law.  No matter how autonomous, the PRC always retained a certain level of control over Hong Kong, and recently, the PRC has attempted to assert even more control.

With an election for a new Chief Executive approaching in 2017, Hong Kong politicians began gearing up for election season.  On June 10th, 2014, Beijing published a White Paper reiterating the PRC’s “comprehensive jurisdiction” over Hong Kong.[xi]  State owned newspaper People’s Daily declared, “Hong Kong can maintain prosperity and stability… only when the policy of ‘one-country, two systems’ is fully… implemented.”[xii]  Some Hong Kong residents saw the White Paper as an attempt by the PRC to pressure voters into backing candidates who support the PRC.[xiii]  Two months later on August 31st, the PRC legislature ruled against allowing open nominations in elections for Chief Executive of Hong Kong.[xiv]  This method of choosing the Chief Executive is in direct opposition to the method used in prior elections where an electoral college selects the Chief Executive.

Specifically, the PRC will have a 1,200-member nominating body select candidates who will then be presented to the voters of Hong Kong.[xv]  After the vote is taken, the Chief Executive-elect must still be appointed to the position by the PRC.[xvi]  Protestors saw this as an opportunity for the PRC to screen candidates for their loyalties to Beijing.[xvii] The PRC justified its recent ruling by stating that allowing Hong Kong to openly nominate candidates would create a “chaotic society.”[xviii]  State owned tabloid The Global Times warned, “[T]he central government will not allow chaos in Hong Kong and it has ‘a lot of resources and leverage’ to prevent such situation [sic] to take place.”[xix]

As a response to the actions of the PRC, pro-democracy protestors began to occupy significant areas of Hong Kong’s financial district.[xx]  Over time, the protests spread, encompassing uptown Hong Kong and across the harbor to Kowloon.[xxi]  Chief among their demands, protestors are fighting for the ability to freely elect their leaders and the resignation of Hong Kong’s current Chief Executive Leung Chun-ying.[xxii]  After the protestor imposed deadline, Chief executive Chun-ying stated that he has no intention of stepping down.[xxiii]

Consistent with their message on the release of the white paper, the PRC is attempting to characterize the protestors as creating disorder among society.[xxiv]  China’s foreign minister, Wang Yi, noted that “Beijing would not tolerate ‘illegal acts that violate public order.’”[xxv]  The protestors have yet to damage property or inflict injuries on Hong Kong police, but the Hong Kong police have responded with tear gas and violence in attempts to disperse the crowds.[xxvi]  As a result of the police crackdown, Amnesty International reports at least twenty protestors have been detained and sixty called in for questioning.[xxvii]

In addition to promoting “order,” the PRC engaged local groups in order to bolster support for the PRC position.[xxviii]  One local group is the Federation of Trade Unions which is used to churn out counter groups of anti-democracy protesters.[xxix]  The disruption of commercial life in Hong Kong is a common critique of the democracy protesters, especially during the large shopping holiday “National Day week.”[xxx]  Not all groups approached by the PRC have been receptive to joining against the pro-democracy protestors.  The Hong Kong judiciary has ignored calls to be “patriotic” and instead asserted their independence.[xxxi]  What initially appears as an internal issue between China and Hong Kong may have international repercussions.

International influence existing and invited regarding the internal strife in Hong Kong is different depending on whose viewpoint is characterized.  Senior officials in the PRC noted that “Hong Kong affairs are China’s internal affairs,” and “[a]ll countries should respect China’s sovereignty.”[xxxii]  Further, PRC President Xi Jinping regularly blames “foreign forces” for encouraging the pro-democracy protests.[xxxiii]  The last time the PRC handled completely internal democracy protests occurred in June 1989 with the deaths of students at Tiananmen Square.[xxxiv]  International reaction and pressure to deaths as a result of the current protests will, undoubtedly, be swift and condemning, but so far, pressure on the PRC has been muted at best. Secretary of State John Kerry reiterated the United States’ long-standing support of “…universal suffrage in Hong Kong, accordant with the Basic Law.”[xxxv]  Maybe hoping the PRC would see the light, Kerry added, “…we have high hopes that the Hong Kong authorities will exercise restraint and respect the protestors’ right to express their views peacefully.”[xxxvi]

China’s international agreements are similarly without teeth. As a signatory on the International Covenant on Civil and Political Rights (ICCPR), China is only required to uphold the object and purpose of the treaty, the object and purpose being the civil rights of its citizens.[xxxvii]  This fact coupled with a restrictive interpretation of the ICCPR could lead to a ratified treaty purporting to protect civil rights, while restricting them under the guise of protecting national and public safety.[xxxviii]  A narrative the PRC is persistently weaving to counter pro-democracy protestors.  In the absence of an international agreement, the argument of international intervention on the basis of jus cogens or erga omnes violations is not applicable.  The PRC transitioned to socialism in 1949.[xxxix]  Certain civil rights have never been a part of the PRC’s socialist regime.  As such, the PRC has a good argument that it is consistent in objecting to the withholding of certain rights, labeling itself a persistent objector.  This would relieve the PRC of any obligation under the ICCPR to respect the civil rights in question.

If the PRC wishes to continue its socialist policies, it is important that it not give into pro-democracy demands.  Giving in to democracy in an area where the PRC can exert a large amount of influence could lead to increased pressure over Taiwan, an internationally recognized “unsettled” state over which the PRC claims sovereignty.[xl]  With no clear end in sight, little support entering the area, and an entire state against them, pro-democracy protestors may be fighting, a battle, albeit a noble one, that they can’t win.

Christian Noble is a third year student at the University of Baltimore School of Law, planning to graduate in May 2015 with a J.D. and a concentration in International Law. He graduated from the Penn State University in June of 2008 with a Bachelors of the Arts in International Politics with a minor in Sociology. He has also studied Japanese and Korean language. During the winter of his second year, Christian studied abroad in Curaçao taking classes in International Law and European Union Law. The following summer, Christian studied abroad in Japan taking classes in International Business Transactions and the Japanese legal system. While in Japan, Christian interned with Nakamura & Partners, a Japanese IP firm located in downtown Tokyo.In addition to being a CICL Student Fellow, Christian serves as the Emerging Issues Editor for the Journal of International Law, Vice President of the Immigration Law Association, Treasurer of the Latin American Law Student Association, Treasurer of OutLaw, and 3L Representative of the International Law Society. Christian is also currently serving as a Maryland Rule 16 Student Attorney with the Immigrant Rights Clinic.