The global tax system needs an overhaul.[1]  The growth of international opportunity has created a danger for the economic health of many countries in the form of tax base erosion. Multi-national companies (MNCs) raise revenues by using domestic tax laws to shift profits in a system that puts investors in the dark, hinders compliance, and encourages peculiar, need-of-the-moment legislation.  Examples of such piecemeal legislation include the current U.S. Senate proposal for a temporary 6.5 percent repatriation tax holiday to fund highways[2] or Belgium’s 2016 proposed “Diamond Regime,” which eliminates the ability to carry forward losses of the MNCs of that industry.[3]

Reform is needed. One much-criticized theory of reform, called “Formulary Apportionment” (FA), still holds its ground in scholastic circles,[4] and this paper attempts to defray a criticism that FA potentially distorts the market, and therefore should be dismissed. FA would restructure a MNC’s taxes so that it pays income in a country based on a formula-based fraction of total income. The goal of FA is to repatriate income that has gravitated to low-tax countries and, in so doing, has undermined the local tax base.  Russia’s new tax regime weakens the criticism of FA in a surprising way: Russia’s recent attempts to create a growth-oriented tax system resulted in negative market distortion despite their best efforts.  This example negates dismissing the theory of FA reform out of hand on the basis of a difficulty faced by tax systems generally.  In addition, the reason for the market distortion in Russia supports FA, in that during the post-2000 tax regime, the oil industry went against its own interests and gravitated toward low-tax products, actions that would have undermined the industry base but for other factors. [5]

FA reform is based on a formula-based fraction of total income (sales, payroll, and capital stock), with the fraction tied to the geographic point of sale.  In the U.S., MNCs currently determine their profits separately in each operational jurisdiction, while goods or services are sent all over the world.  A system of FA would replace this separate accounting method.  For example, a MNC would pay U.S. taxes only on the share from its total income that is allocated to the United States.

A move to FA would noticeably reduce incentives to shift economic activity or income to low-tax countries, and by treating similar firms in a uniform fashion, regardless of where they are incorporated, would eliminate much administrative complexity.  The theory, however, has been regarded as having many faults, most of which center around the hazards of applying the method in the current environment of different systems and different currencies.  One stand-alone criticism, and the subject of this blog post and the two subsequent posts over the next weeks, is that there would be problems in violations of a commitment to a growth-oriented tax system that minimizes the distortions of market signals (the stated OECD goal for tax reform among OECD nations).[6]  However, it could be argued that the FA method of taxing based on geographic location of sales would likely support growth because it allows for a “local” government, which is closer to the source income, to potentially promote the industry with careful tax design.

Russia’s new tax regime has such a goal for its oil industry; policy-makers’ desire to stimulate upgrades in its oil refineries. Russian refineries were originally built to satisfy the demands of the Soviet industry, and, as of 2000, produced large volumes of fuel oil, low-quality diesel, and low-octane gasoline.[7]  Its crude was mostly processed to be fuel oil for domestic heating needs.[8]  Now, the market has a permanent demand for the higher flashpoint fractions, i.e., high-octane gasoline, petrochemical feedstock, and jet fuel.[9]  In 2000, the government took on configuring a “growth-oriented tax system,” one that would not only encourage refinery upgrades, but also satisfy the needs of the government, since thirty-two percent (32%) of Russian government revenue comes from oil-extraction taxes.[10] 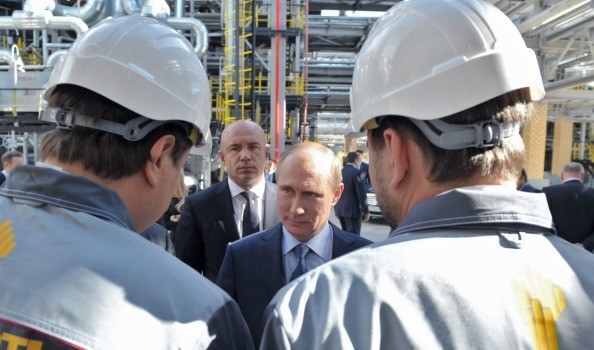 To stimulate refining depth, Russia implemented the equivalent of a micro-version of FA when applied to the Vertical Integrated Oil Companies (VIOCs) (the “well to pump” large companies, like Royal Dutch Shell or Exxon).  The oil industry has two sectors generally, “upstream” and “downstream.” The first refers to all aspects of lifting crude from a field, and the second refining the crude (either by straight run or the more processing-intense ‘cracking’) to produce valuable products like gasoline.  Refineries, obviously, are part of the downstream sector.   Russia chose to structure its tax burden evenly between the upstream and downstream sectors, in the hopes of creating cross-subsidy between upstream and downstream segments, providing significant impetus to refineries, including primary processing plants.  This it did by lowering export duties on oil products, and pricing crude oil domestically as a function of export netback price.[11]  “Netback” subtracts the costs associated with bringing one unit of oil to the marketplace from all of the revenues from the sale of all the products generated from that same unit.  By basing the tax regime on the concept of “netback” and then working backward to figure tax on a fraction that is tied to sector, this is similar to the structure of FA when applied to the microcosm of a VIOC.

The result was that since the year 2000, the total output of Russian refineries has risen from 190 million tonnes to 302.5 million tons, with VIOCs accounting for 57% of increased volume.[12] In only eight years, from 2005 to 2013, total downstream investments by domestic VIOCs soared from US$1.4b to US$10b, with investments over the past three years rising by US$2.3b*.[13]

An interesting aspect in this result was that the initial response by the VIOCs was to use the savings on exports to just do more of what they were already doing, i.e. producing low grade oil products.  Although dashing the hopes of Russian policymakers, the tax maneuver indirectly drove refinery upgrades as the extra funds were available as VIOCs responded to market pressure by ultimately upgrading the refineries.

Though the result appears to strengthen the criticism that FA results in negative market distortion, it actually undermines the criticism for two reasons. First, by virtue of the fact that distortions simply happen despite efforts to the contrary: a favorable tax environment was and is seen in Russia as a crucial driver of investment activity in the downstream segment.  A general attack discounting FA as a legitimate theory for this reason is inadequate at best, since FA is such a large system reform.

Second, the Russian cross-subsidy example supports the FA reform broadly in an unexpected way.  FA advocates assert that the current system generates a large tax incentive to earn income in low-tax countries, and multinational firms respond by earning disproportionate profits in low-tax locations.  In the Russian example, even though it was in the VIOC leaders’ best interests to upgrade refineries – and there were many upgrades that were financially feasible – when faced with the lowered duties on exported oil products, rather than upgrading, producers gravitated toward the low-taxed products in their own industry.

In my next blog I will discuss how the recent Russian bunker oil pricing continues the global tax reform analysis. Stay tuned!

Julia Brent is a third year law student at the University of Baltimore, focusing on International Tax (candidate for J.D. 2016). Julia graduated from the University of Hawaii with a B.A. in political science. As a CICL Fellow, she is interested in the tax impact of cross-border transactions on medium to large businesses. Julia has extensive experience in the management of high volume cases, including handling distributions related to a multi-million dollar art estate and managing all expert witness contracts for the Savings & Loan (WINSTAR) litigation, a $30 billion dispute involving 125 cases, on-site at the Department of Justice.

2 thoughts on “Getting Global Tax Into Top Gear:  How Russia’s New Oil Tax Regime Supports the Case for an Old Reform Theory”