David Cameron has led the British Parliament since 2010 and, since that date, has not shied away from controversy. Policies such as increases in tuition fees for university education, privatization of the National Health Service, and military action in Libya have led to protests in the streets. While his leadership has been unpredictable and his policies at times self-contradicting, he has grown the Conservative Party to the point where it holds an outright majority in the House of Commons. His most recent controversy involves the Government’s self-proclaimed obligations (or lack thereof) to protect and uphold international law.

The Cabinet of the United Kingdom is the collective decision-making body of Her Majesty’s Government of the United Kingdom, made up of the First Lord of the Treasury (also known as the Prime Minister), and members of Parliament appointed by the Prime Minister to lead government departments.[1] Though typically selected from the House of Commons, it is not entirely uncommon for members of the House of Lords to be selected for certain posts. The most senior members of the Cabinet are the Deputy Prime Minister, Foreign Secretary, Chancellor of the Exchequer and Home Secretary.[2]

Unlike in the American system, Cabinet Ministers are not necessarily experts in their field, and rely heavily on the input of members of the Civil Service for developing and implementing policy.[3] Additionally, members of the Cabinet in the United Kingdom have joint responsibility for government departments, and may, pursuant to the Ministers of the Crown Act 1975: 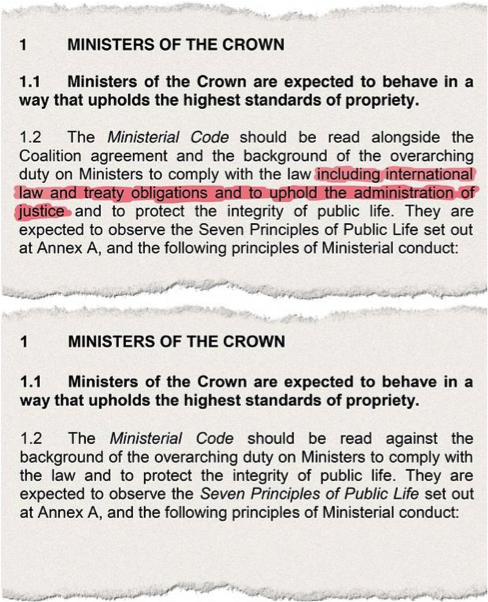 Cabinet Ministers are bound by the Ministerial Code, which provides ethical guidelines for the performance of their duties and outlines their relationship with Parliament. The first sentence of the Ministerial Code reads, “[t]he Ministerial Code should be read against the background of the overarching duty on Ministers to comply with the law and to protect the integrity of public life.” This is not how the sentence has read historically, however. Until October of 2015, the Ministerial Code began with providing an obligation for members of the Cabinet “to comply with the law including international law and treaty obligations…” On October 22, the Guardian published an article noting the deletion of references to international law from the Code.[4] As an executive body of the British system of government, this change (though subtle) has potentially enormous implications for the United Kingdom’s relationship with the rest of the world. Philippe Sands QC, a professor of law at University College London, said the change was “shocking. Another slap to Magna Carta and the idea of the rule of law. A government that wants to ditch Europe and sever the connection with the European Convention on Human Rights now wishes to free itself from the constraints of international law and the judgments of international courts.”[5] Ken MacDonald QC, a former director of public prosecutions, piled on to the mounting criticism of the Government’s move, stating that “[i]t is difficult to believe that this change is inadvertent. If it’s deliberate, it appears to advocate a conscious loosening of ministerial respect for the rule of law and the UK’s international treaty obligations, including weakening responsibility for the quality of justice here at home.”[6]

Mr. MacDonald’s claim that the Government’s change in policy was deliberate doesn’t require particularly deep research to back up. The Tory website hosts a pamphlet called “Protecting Human Rights in the UK : the Conservative’s Proposals for Changing Britain’s Human Rights Laws,” in which the party promises that “[w]e will amend the Ministerial Code to remove any ambiguity in the current rules about the duty of Ministers to follow the will of Parliament in the UK.”[7] The Conservative Party has a fair amount of support from Euroskeptics, and has attempted to woo voters away from the UK Independence Party (UKIP) by not-so-subtly promoting an anti-EU agenda. With an upcoming referendum on the UK’s continued membership in the EU, the Conservative party has crafted its international law obligations to reflect their desire for Parliament to once again be the supreme body of law, without interference from Brussels.

What is extremely troubling about this is that the European Union is already on shaky ground with the recent crises surrounding Greek debt, the influx of Syrian refugees, and others. The Cameron Government’s decision to distance itself from the international community is a regressive policy which stands only to harm British interests. Without a strong commitment to establishing itself as a participating member of the international community, let alone a voice within the European community, the Cabinet finds itself in the precarious situation of being Europe’s least social member. As the world becomes more interconnected and reliant on international commerce, Britain’s continued aversion to participation could spell out its downfall from the international stage. While Britain retains a seat on the U.N. Security Council, it appears to be a holdover of those lost days when Britain held its head high as a global power and exercised itself as a force for good. While David Cameron backs both horses and pledges personal loyalty to the EU, yet simultaneously dismantles Britain’s obligations to the mainland, he belittles Britain’s prestige, rather projecting his country to the world as a manic and indecisive antique, wrestling with the opposing forces of its colonial past and potentially tumultuous future.

Shane Bagwell is a 3L at the University of Baltimore School of Law, and a graduate of West Chester University with a Bachelor of Arts in Political Science. He currently serves as the President of the Military Law Association. His interests are Middle Eastern politics, international conflicts, and the law of land warfare. He is currently a law clerk for the Office of the State’s Attorney for Baltimore City, Economic Crimes Division.