“We live on loans, this reform will destroy us…We won’t back down, there is no way. If we do, we’ll starve.”[1]

The “Greek Farmer Crisis” began on January 20, 2016 when Greek farmers used tractors to blockade the main highway connecting Athens to Greece’s second largest city, Thessaloniki.[2] Most people are somewhat familiar with Greece’s economic crisis, including the country’s debt, recession, and capital control in reaction to IMF and EU-imposed regulations.  These regulations are now affecting Greece’s farmers, who have not been reluctant to show their adversity.

Since January 20, 2016, farmers have blockaded 68 points throughout Greece, including the main road on the Greece-Bulgaria border. Since Friday, February 12, 2016, thousands of farmers have set up protest camps outside of the nation’s parliament, in Athens[3], protesting against the Greek government’s new bill. The bill will hike taxes and cut pensions as part of an economic reform in response to the IMF’s and the European Union’s regulation, as Greece is trying to secure a third bailout.[4] 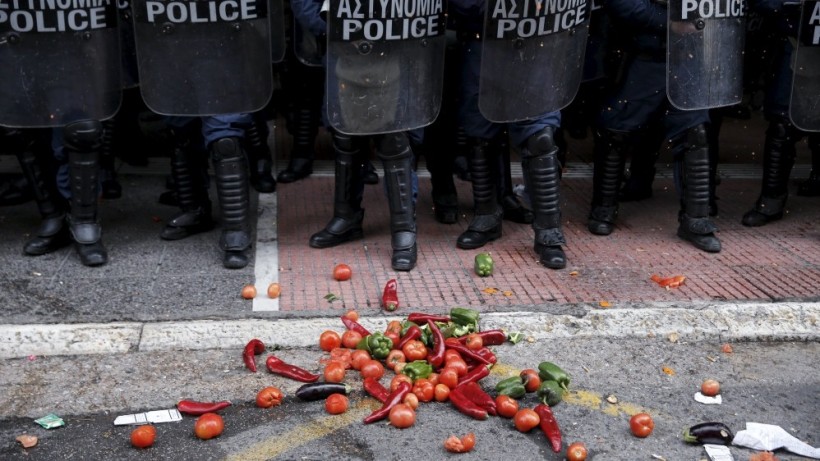 The bill by the Greek Prime Minister, Alexis Tsipras, and his party, SYRIZA, will create reforms targeting farmers to deal with the country’s deficit. However, the reform comes as a shock to most of the public. Two decades ago, farmers did not pay into social security and only up until two years ago, a farmer’s income tax was set at a relatively low 6%. Since the tight austerity measures have been implemented, farmers’ income tax has more than doubled to 13% in the last two years. The tax rate is projected to jump to 26% this year, alongside the 10% hike of a 23% sales tax on seeds, livestock food, and pesticides.

The reform on pension spending is just as brutal. The IMF was not satisfied with Tsipras’ last austerity measures, which resulted to a pension-spending cut of only $2bn. The bill is Tsipras’ reaction for not only tighter measures, but also tighter measures to more goods and professions to meet the EU and IMF-imposed target of cutting pension-spending by $9bn. From total immunity in the last 20 years, farmers will now have to pay 27% of their annual income on top of the annual $780-1,300 every farmer must pay to the Agriculture Insurance Organization.[5]

The farmers have been joined by unionists, mainly from the most powerful agricultural union, ADEDY, since the blockades. The Greek Communist Party (KKE) also joined to support the farmers at the protest camps in Athens and to assist in lending a voice against the bill.[6] The blockades and the protest camps have been mainly organized by unionist, Vangelis Boutas[7], who has also been the representative in addressing the media or the government, should dialogue between the two groups open up. Boutas rebuffed Tsipras when he announced that he would discuss the bill with the farmers and stated that he will only talk with officials once the bill has been rescinded.[8] Interior Minister, Panagiotis Kouroublis, responded by stating that “the government is not heeding to ultimatums…the farmers should not miss this chance for a dialogue.” [9]

The Agriculture Minister and Tsipras support the bill and, although they are open to talks and slight modifications, they have dismissed any notion of withdrawing it. Tsipras stated that the bill is “not optional, nor merely a conventional obligation of the country…it is absolutely necessary for the pension system itself to have a future.”[10] 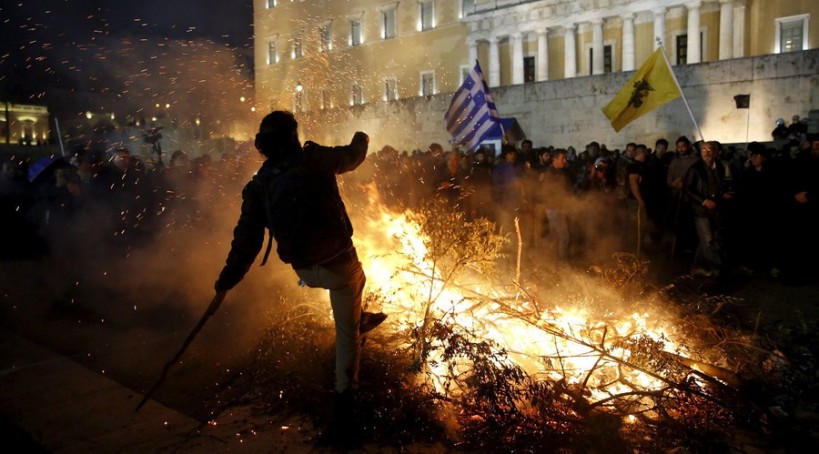 Hostilities since February 15 have decreased and most of the farmers from the protest camps have left, even though some blockades are still in effect. Currently, uncertainty looms over the material terms in the bill as well as the bill’s future with Tsipras’ party having only a 3-seat majority in the parliament.

SYRIZA’s small 3-seat majority should not deter thinking that the bill will not pass. The country’s third bailout is dependent on the planned pension-cutting as the IMF and the EU are high-stakes creditors constantly breathing down Greece’s neck. The Central Bank Chief noted that the projected economic recovery in the second half of 2016 is contingent upon the bill passing without further delays,[11] which should serve as a persuasive foreshadow to the parliament voters. Although most farmers are skeptical of Tsipras’ promises, he has promised that they will be the main beneficiaries of $11bn EU subsidies over the span of seven years.[12] The subsidies are likely planned as such to maintain a high agricultural yield of exports as it is one of the country’s main economic sectors.

Apart from the high taxes and the cuts on pension-spending, there are other surprising things that one may miss just from taking the events that have unfolded at face value. Tsipras’ party, SYRIZA, is the radical left party of Greece. Yet amidst the protests, the party’s main opponents have been unions and the Communist Party of Greece, two groups who have been adherents to leftist ideology and with leftist constituents. It is an interesting note and shows Greece’s dependency and weakness, while highlighting the country’s important geopolitical position. The EU and the IMF have made the radical left government adopt regulations usually fit for a radically conservative government, yet Greece has no option to rebut the terms. The government may try to modify them but the EU and the IMF want to accomplish the $9bn pension-cut target, while keeping Greece in the Eurozone and maintaining political stability. 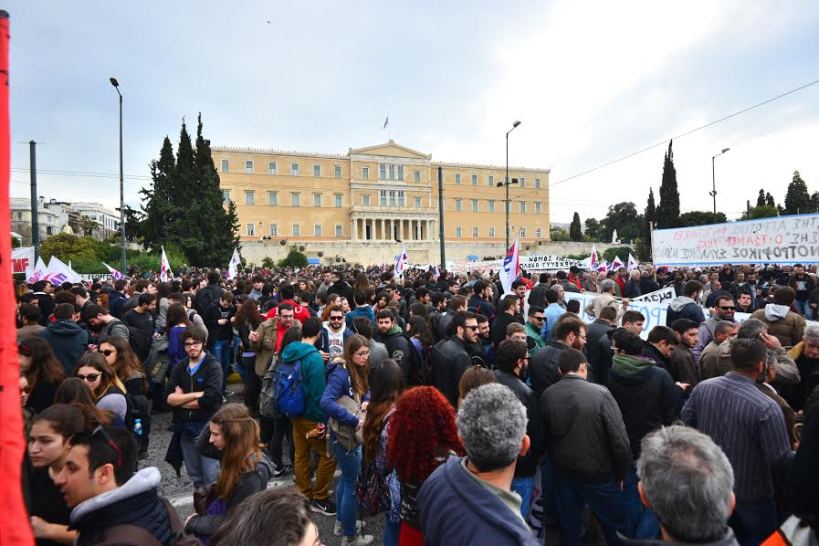 Another surprising tidbit is the reported Athenian dismissiveness towards the farmers. Many Athenians, from the urban capital, actually see the reform as a good thing; as a way of punishing a “pampered constituency”[13] that did not contribute into social security for two decades. The Athenian mentality should not have any effect on the bill, as it will likely still pass. Although the farmers and Tsipras have not formally met, some of the austerity measures and reforms in the bill will likely be ‘loosened up’ as well, due to the economic needs of agricultural exports. As a journalist covering the protests stated, “The only way to export capital is to import it.”[14]  The main way to pay the debt is to pay it off with the money coming in from agricultural exports, which are one of the biggest parts of Greece’s economy. As a consequence, if the protests keep delaying production or production slows or stops as a reaction to the reform, the country’s debt will actually grow. Such reform coupled with consumer capital control on limiting daily cash withdrawals or restricting movement of money creates a scheme of loan dependency.

John Rizos is a 2L at the University of Baltimore School of Law. He has an interest in human rights and international criminal law. In addition to being a CICL Fellow, he is the Secretary for Phi Alpha Delta. He graduated with honors from Towson University with a BA in International Studies (2013). He has interned at the Press Office of the Greek Embassy in Washington, D.C. and the International Civil Advocacy Network (ICAN), a non-profit organization advocating for women’s rights in the Middle East.