It is no big surprise that China has a problem with respecting the territorial waters of others. Recently, the Permeant Court of Arbitration (“PCA”) ruled in favor of the Philippines; a proceeding that China did not participate in and has not abided by the PCA’s decision.  However, since the early 2000s South Korea has been dealing with China encroaching on its waters.[1] The water disputes are really between South Korea and Chinese fisherman who illegally fish in South Korea’s waters. Chinese fishermen have been illegally fishing in South Korea’s waters due to the depletion of seafood in their own waters and the increasing demand that the more prosperous Chinese population has to spend on seafood.[2] The South Korean Ministry of Defense reported that 520 Chinese fishing boats were caught for illegal fishing between January and May of this year and 120 instances in 2015.[3] The South Korea coastguard has reported from 2006-2011 about 2,600 seizures of Chinese fishing for illegal fishing. 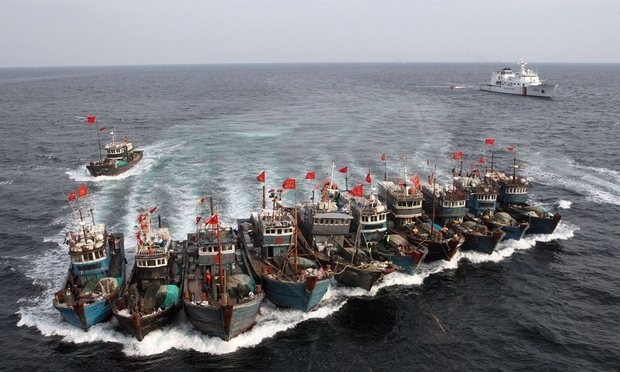 This is not the first instance where illegal fishing has turned violent and deadly between the South Korean coast guard and Chinese fishermen. The escalation for violence is due to Chinese fishermen trying to escape arrest and fines for thousands of dollars. Chinese fisherman have been reported to be in possession of axes and steel pipes in order to prevent the South Korean coastguard officers from entering aboard. Also, Chinese ships chain each other together to resist seizure. Moreover, they have taken advantage of the tensions between South and North Korea. They sometimes sign contracts in North Korea to cross the boundary into South Korean waters.[6]

The South Korean government expanded its fishing zone and hours on October 1st,  intended to help local fishermen increase their income as well as the struggles they have faced with Chinese fishing boats being there illegally.[9] This appears to be in response to the most recent incident and because South Korea has politely urged China, but to no avail, to deal with its fishermen illegally fishing. The new policy broadens the Yeonpyeong Island zone by 14 square kilometers to the west. Fisherman will be allowed to start fishing 30 minutes before sunrise and one hour after sunset during the months of April-May and October-November, all of which are the peak of crab season.[10] Furthermore, this past Tuesday, the South Korean made an announcement that their coast guard would start using force, this includes ramming into fishing vessels, and crews service weapons or individual weapons for those who try to violently resist.[11] South Korea has also began installing anti-trawl devices on the seafloor near the border which would foul up Chinese fishermen’s nets.

China has raised concerns that South Korea’s actions of using law enforcement as a violation of the bilateral fishing treaty in force by both parties. China has also made official comments in the past about South Korea using fair and non-prejudicial treatment and procedure when it comes to detaining and questioning of its nationals. Under international law, some of the deaths of its Chinese nationals in past disputes may rise to damages only if South Korea has failed to prevent an unlawful death or injury cause by agents of the state.[12] However, South Korea doesn’t have the same possibility. This is because the fishermen are private individuals and the deaths happened in South Korea’s waters.

China may also have another claim to the expansion of South Korea expanding its territorial waters if South Korea actually has mechanisms in place to make this policy effective. States are given 12 nautical miles as their territorial waters. Under the Law of Sea there is nothing that allows a State to expand its waters. However, if China wants South Korea to conform to the Law of the Sea convention it would first have to respect the decision of the PCA and cease its activities in the South China Sea.

The liability issues involving all three States also are entangled with politics as well so one of these countries taking legal actions is very unlikely as well because their relationships are fragile.

Kia Roberts-Warren is a 3L at UB Law. She is concentrating in international law. Kia graduated from Temple University receiving a BA in East Asian Studies during that time she spent a semester in Tokyo, Japan. Kia has an interest in international trade and human rights. She is also interested in fashion law and art law in the international context. Last year, she held the position of Career Development Director of the International Law Society and participated in the 2016 Philip C. Jessup Moot Court Competition. She recently attended UB’s Aberdeen Summer Abroad Program.