Sex strikes, or lysistratic nonaction, are a real and, arguably, useful tool for women around the world in order to force their men to implement change.[i]  A sex strike is when persons, typically women, withhold sex from their partners to achieve certain goals.

Most recently, sex strikes made headlines when Mishi Mboko, a Kenyan parliamentarian, asked all female voters to withhold sex with their partners.[ii] With tension rising in anticipation of the presidential election, Mboko urged women in areas where the opposition is popular to withhold sex until their husbands showed them their voter registration cards.[iii] Ms. Mboko said that “sex is a powerful weapon” that would encourage reluctant men to register as voters.[iv]

Despite having a few prominent female politicians, Kenya remains a misogynic, patriarchal conservative society.[v] Since Kenya gained its independence from Great Britian in 1966, the country has only had four presidents, including the incumbent Uhuru Kenyatta.[vi] Kenyatta, coincidentally, is the son of Kenya’s first present, Jomo Kenyatta.[vii] There was much controversy when Uhuru Kenyatta initially took office in 2013, with the Kenyan Supreme court having to intervene and determine that the elections were valid with no regularities.[viii]

Since then, many other political groups have sought to oust President Kenyatta’s Jubliee Party. Mboko, who is a member of the rival National Super Alliance has said that the need for all citizens to vote is so crucial that women must do their parts by forcing their husbands to vote. However, the National Super Alliance is not the only party pushing country wide voter registration. President Kenyatta himself is also advocating that Kenyas coming out and register as voters, except he is not advocating a sex strike.[ix]

The question arises why do Kenyan woman feel as though they do not have a political voice and they need to use sex as a bargain tool. First, it is important to note that Kenya is a party to the Convention of Elimination of all Forms of Discrimination Against Women (CEDAW), a treaty that serves as in “international bill of rights for women”, describing and defining what constitutes discrimination against women and establishing an international agenda for national action to end such discrimination.[x] By becoming a party to CEDAW, the Kenyan government has agreed to make a series of changes to protect women’s rights, including incorporating women equally into their government.[xi] However, despite new Kenyan laws designed to increase the number of elected women in Kenya politics, Kenyan women still have the lowest level of parliamentarian representation in their region.[xii] Though Kenyan women have the right to vote, they are not reflected in their government.

However, as aforementioned, Kenya is a conservative patriarchal society, where most woman shy away from politics and focus on business. Kenyan woman have learned that in addition to their rights, they can maintain a certain level of control over their husbands by withholding sex.

Ms. Mboko is not alone in her attempts to use Kenyan women to use their feminity to help implement change in the voting booth. Esther Murugi, another Kenyan poltician, has also called on Kenyan women not to cook for their husbands and for pastors not to welcome worshippers to their churches unless they can prove they are registered voters.[xiii]

This is not the first time that a sex strike was used by women to try to implement political change in Kenya. In 2009, after a number of failed peace-building measures, the Women’s Development Organisation, a women’s right group announced a weeklong sex-in as an attempt get former President Mwai Kibaki and former Prime Minister Raila Odinga to make reconcile.[xiv] The group approached both the politician’s wives and even went so far as to pay prostitutes not to work.[xv]

The question arises as to whether sex strikes have actually shown to be effective. Sadly, there has been no empirical evidence that sex strikes are successful in obtaining any kind of political leverage. In fact, 2011 Nobel Peace Prize winner Leymah Gbowee, who helped organized a sex strike in Liberia in the early 2000s in an effort to end the country’s civil war, mentioned in her memoir that the Liberian sex strike actually has “little to no effect”.[xvi] 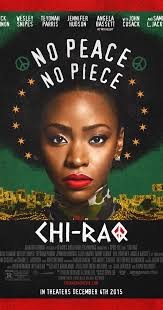 Would this work in the United States?

In 2015, Spike Lee’s musical drama “Chi-Raq” explored the effect of a sex strike in America. In the movie, the girlfriends of top rival gangs in Chicago withheld sex from their boyfriends until the bloodshed stopped.[xvii] Similar to the strike in Kenya, they required all women, including mistresses and prostitutes to support their cause.[xviii] In the end, their sex strike resulted in the rival gun member dropping their weapons and ending the bloodshed.[xix]

Soon after the move, a woman in Chicago started a petition in order to get all the women in Chicago to go on a similar strike in hopes of achieving a similar goal.[xx] Though the petition is now closed, it gained roughly 100 signatures. While ultimately unsuccessful in gaining massive traction, it good to know that feminist grassroots organizations in America are considering alternative methods to bring international attention to local issues.

J. Michal Forbes is a proud native of Prince George’s County, Maryland, Ms. Forbes has a fiery passion for international law, travel and frozen yogurt. After receiving her B.A. in Political Science from the University of Maryland, Baltimore she taught ESOL in the Washington, D.C. Metropolitan area before joining the US Peace Corps in 2011. Ms. Forbes served in the Peace Corps in Ukraine from 2011 to 2013, in a small town between the Red Sea and the Black Sea in Crimea. Fluent in Russian, Ms. Forbes soon caught the travel bug and traveled/worked extensively throughout Eastern Europe during her 27 month commitment. Currently a 3L, Ms. Forbes is a member of the International Law Society, Immigration Law Society, Black Law Student Association and the Women Lawyers as Leaders Initiative. She has worked for Maryland Legal Aid and the NAACP’s Office of the Attorney General. She was recently awarded the honor of being named Article Editor with the University of Baltimore Law Forum, a scholarly legal journal focused on rising issues in Maryland. It is her dream to work for the U.S. government assisting with asylum seekers and refugee.

In her free time, Ms. Forbes enjoys eating frozen yogurt with her husband and learning Arabic.

[i] Do Sex Strikes Ever Work?, Slate, http://www.slate.com/articles/news_and_politics/explainer/2012/08/sex_strike_in_togo_do_sex_strikes_ever_work_.html

[v] Why women do not vote for women, Standard Digital, https://www.standardmedia.co.ke/article/2000223551/why-women-do-not-vote-for-women

[x] Convention on the Elimination of All forms of Discrimination against Women, UN, http://www.un.org/womenwatch/daw/cedaw/