Russia owns the North Pole. At least… Russia claims it owns the resources of the North Pole. When it comes to expanding its territorial influence, Russia has been busy lately. Invade a neighbor here,[i] illegally annex some territory there,[ii] and violate airspace elsewhere. [iii] Russian President Vladimir Putin’s latest foray is a resource claim to a vast swath of the Arctic Ocean, including North Pole. 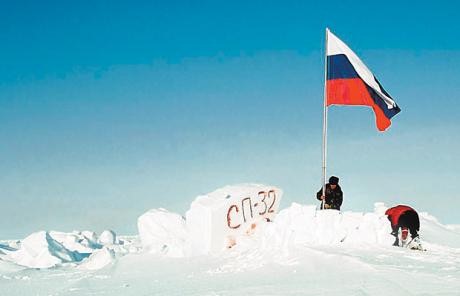 To be fair, Russia is at the moment making this grab via lawful means unlike, for example, its illegal annexation of the Crimean peninsula. Russia has made its claim under the 1982 U.N. Convention on the Law of the Sea (UNCLOS).[iv]  UNCLOS defines coastal states’ claims to adjacent waters. Under the treaty, a coastal state has exclusive economic rights, meaning sole access to and control of all the resources, in waters extending 200 nautical miles from its coast. UNCLOS also allows a coastal state to claim exclusive economic rights over any part of the ocean over the continental shelf protruding from the coastal state. Continental shelf rights can exist beyond the EEZ up to 350 nautical miles from the coast if the coastal state can establish that the foot of the continental slope exists that far out[v]. The EEZ and continental shelf areas are not part of the state’s territory, although they are immensely valuable to the state because the state alone has access to all the resources, such as oil and fish, and can prohibit other states from accessing those resources.

Russia claimed in August that the foot of its continental slope exists 350 nautical miles, and possibly even further, from its coast. Therefore, Russia is entitled to exclusive economic rights that far from its coast.[vi] The claim far exceeds current understandings of arctic exclusive economic rights, which limits Russia to the outer limit of the EEZ. If Russia’s claim is valid then Russia has exclusive economic rights to over 460,000 square miles of the Arctic Sea, including the North Pole, all of which is currently classified as international waters. The area is estimated to contain up to 10 billion tons of oil and gas deposits, as well as large fisheries, and vast reserves of diamonds and valuable metals such as gold, tin and platinum.[vii] In addition, major potential shipping routes are emerging as global warming melts the polar ice caps. It’s not surprising that Russia wants to control this area itself given its significant economic importance, strategic advantage, and increasing accessibility. 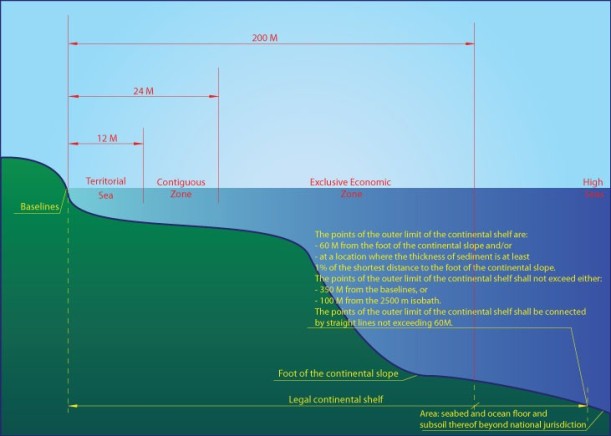 Russia has been building toward this claim since at least 2002 when it filed a similar UNCLOS claim which was rejected for lack of scientific evidence.[viii] Since that time Russia has been amassing what its Foreign Ministry claims is “a broad range of scientific data collected over many years of Arctic exploration” to support its argument that the continental foot exists 350 miles from shore.[ix] Russia was not shy about asserting its North Pole presence while it was gathering all that evidence. In 2007, Russia dispatched a well-known Russian explorer in a submarine to the seabed directly below the North Pole where he took a soil sample and planted a Russian flag made of titanium.[x] More recently, last March Russia asserted its military strength in the area with a massive exercise involving over 40,000 servicemen, 41 warships, and 14 submarines.

The U.N. Commission on the Limits of the Continental Shelf will deliberate Russia’s claim at its next session.[xi] The Commission must consider if Russia’s newly presented evidence is enough to grant Russia the exclusive economic rights it desires. Russia will likely have to have a far more convincing case than it did in 2002. 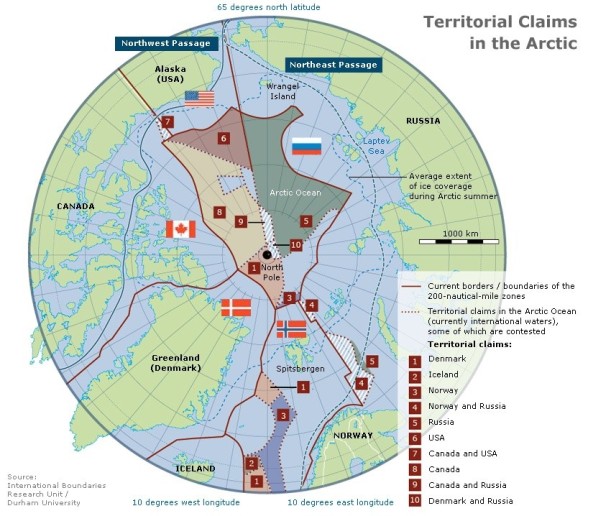 Not to be outdone in the race for a treasure of resources and shipping routes, the United States, Canada, Norway, and Denmark all have their own claims to exclusive economic rights in the Arctic, many of which extend beyond the EEZ. (It should be noted that the United States has not ratified UNCLOS.) As the ice melts, all the bordering states are looking to take advantage. The competing interests make the cold North Pole a potential hot spot for violent conflict.[xii] The potential for Arctic conflict is certainly amplified if the U.N. denies Russia’s claim as expected. Or, for that matter, if the claim is approved, then the United States, Canada, Norway, and Denmark will be forced to do something to hang on to their power in the Arctic. Russia is certainly capable of using force, or at least forceful deterrent, to protect what it views as its exclusive Arctic resources. Russia has proven in Crimea that it is willing to violate international law to expand its territory and power even in the face of punitive sanctions. Amidst increasing tensions in the Ukraine, Syria, the Balkans, and elsewhere, Cold War rivalries might finally heat up to hostilities in the Arctic.