Mauritania is a country in West Africa, and has become the fourth country overall and second African country to approve a UN Treaty designed to put “teeth” in its efforts to stop modern day slavery – specifically, forced labor and trafficking[1].  The 2014 Protocol modernizes the Forced Labour Convention of 1930.[2] The states that ratify the new protocol must “change laws to improve victim protection, compensation, and access to justice.”[3] . The protocol includes (1) measures to prevent modern forms of slavery and (2) to compensate victims. The International Labor Organization (ILO) seeks to have at least fifty countries sign the protocol by 2018. The ILO estimates that 21 million people are forced into labor worldwide, which is a $150 billion dollar a year industry (in illegal profits). Common places where slaves are used include: brothels, farms, fisheries, factories, construction and domestic service.[4]

However, one problem that arises when discussing slavery in Mauritania is that Americans do not have a framework for what slavery looks like in other countries.  Slavery in Mauritania looks different than slavery in American history books.[5] The slavery that dominated the southern U.S. states was based on human exploitation. Some argue that in Mauritania, in contrast, is a “rural fiefdom within an agro‑pastoral lifestyle, marked by social stratification and division of labour” rather than “systematic torture and segregation.” Slaves are still subordinate in society, but not marked by shackles and physical abuse in the way it was in the American south.[6] One particular gendered form of slavery is that girls from Mauritania are commonly trafficked to the Middle East, according to U.S. State Department’s Annual Trafficking Report.[7]

Slavery in Mauritania is also determined by a caste system. The slave caste is called the Haratin, descended from Black African ethnical groups along the Senegal River. They are usually Herders and domestic servants.[8] In contrast, the ruling caste – a minority – is the Beydanes (Arab-Berbers), who hold the wealth and political power.[9]

Slavery is a de jure crime in Mauritania, but it is still practiced.[10] Mauritania criminalized slavery in 2007. In 2015, the government passed a new law that makes the offense a crime against humanity, doubling the prison term to twenty years.[11] However, the Global Slavery Index indicates that Mauritania has the highest prevalence of slavery in the world, with 4% of population is enslaved (Four percent of the population totals about 150,000 people).[12] Although now technically freed according to the law, majority of those not enslaved still live in slums and unemployment.[13]

Even after slavery was criminalized in 2007, those campaigning for its abolition still face many obstacles. Anti-slavery advocates allege that “complaints [that people are still being enslaved] are not properly investigated and that anti‑slavery campaigners have been arrested and jailed [for making those complaints].”[14] The jailing of these advocates is not surprising in the context of Mauritania’s judicial system, as the assertion that the justice system is failing victims of slavery in Mauritania is not unprecedented. The judicial system is heavily influenced by the government and has a reputation for being corrupt. Most of the members of the judicial system are also Beydanes, the ruling caste.[15] Nema Oumar is a journalist who wrote an article that alleged that a defense attorney had bribed three judges with 25 million ouguiyas (68,650 euros) to release a police officer and businessman accused of drug trafficking. Oumar was arrested and held for defamation as a result of his article.[16] 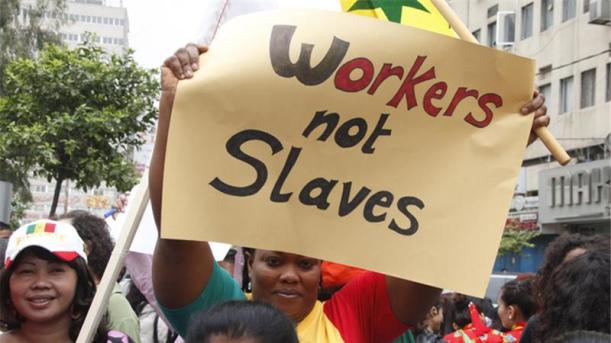 Shortly before the UN Human Rights Council in Geneva was set to review the “Roadmap to Combat Vestiges of Slavery” (a 49-page report published by the Mauritanian government), a group of NGOs released a report of their own. This group consisted of the Society for Threatened Peoples, in cooperation with the Unrepresented Nations and Peoples Organization (UNPO), Anti‑Slavery International, IRA‑Mauritania, SOS‑Esclaves, and Kawtal Ngamyellitaare. Their report, titled “Slavery in Mauritania: The Roadmap to combat the vestiges of slavery is not being implemented convincingly,”  argues that the Roadmap has failed to effectively implement any of its goals. Speaking on behalf of the group, Johanna Green of the UNPO stated that “[t]he lack of implementation of the Roadmap clearly points to the absence of political and judicial will to address the problem of slavery which is exacerbated by the Mauritanian Government’s denial of its very existence.”[17] Her statement summarizes the critical position that many have taken to the Mauritanian government’s efforts, which is that there needs to be more support among government officials, judges, and attorneys in order to effectively enforce the goals involved in ending slavery.

The ILO’s Africa director (Aeneas Chapinga Chuma,) stated that the ratification of the UN Protocol is “a first concrete step in putting in place the legal framework to protect people from the scourge of human exploitation and forced labor.[18] By essentially updating the Forced Labour Convention and improving laws to focus more on victims, states such as Mauritania will have more powerful enforcement mechanisms in place for ending slavery, a practice that is woven into the fabric of its culture.

Alison Aminzadeh is a third year law student at the University of Baltimore. She is currently a Rule 16 attorney working on the Human Trafficking Project as a part of the Civil Advocacy Clinic. She is also a Senior Staff Editor for the Journal of International Law, and the former President of the Students Supporting the Women’s Law Center.

The month of October began with two separate attacks on United Nations (UN) peacekeepers in Mali. On October 3, unknown attackers killed nine UN peacekeepers in Mali.[1] On October 8, a second attack occurred, resulting in the death of one UN peacekeeper.[2] Both attacks have been linked to the UN’s mission to guard against militant Islamists who posed a threat to Bamako, Mali. These attacks are indicative of the security problems in Mali, which have only been further exacerbated by both food insecurity and extreme poverty throughout Africa’s Sahel region, an area that stretches from the Atlantic to the Red Sea, including Mali, Chad, Mauritania, Niger, and parts of Sudan, Cameroon and Nigeria. However, it is the lack of attention or response from the international community for these attacks that is equally striking and highlights the need for more attention and focus on UN peacekeeping missions, generally.

Despite the unconfirmed identities of the attackers, these attacks potentially show the danger of growing extremist behavior in Africa. Although MINUSMA, the UN peacekeeping force based in Mali, has not indicated who is responsible for these attacks, there were 30 survivors. One of these survivors, from Niger, stated that the attacks were carried out by the Movement for Oneness and Jihad in West Africa (Mujao), an al-Qaeda-linked Islamist militia.[3]

The UN began their peacekeeping mission in Mali in April of 2013 as a response to northern Mali falling under the control of Tuareg separatists and Islamic extremists with links to Al Qaeda after a military coup in 2012.[4] Mali entered into conflict after a coup in 2012, which failed to handle the Tuareg rebellion in Mali’s northern desert region.[5] “Al-Qaeda with its Islamist allies took advantage of the subsequent chaos to seize the north, sidelining the Tuaregs.”[6] Despite French-led interventions in 2013, which successfully scattered extremists, some groups still remain active and continue to act violently.[7] Following this intervention, peace talks begun between the Malian government and the Tuaregs, however, as French troops have removed themselves from the region, the situation has become “intolerable” per Hervé Ladsous, U.N. Under-Secretary-General for Peacekeeping.[8] 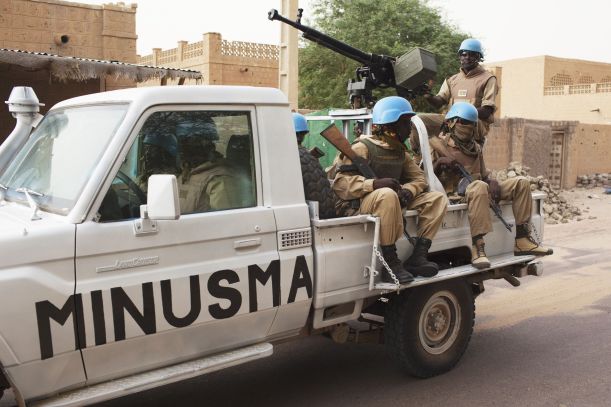 The international community’s lack of response to these attacks is extremely concerning. Other than minor news coverage reports detailing the number of casualties, there has been minimal international reaction. UN officials have commented on the events, with United Nations Secretary-General Ban Ki-moon expressing “shock and outrage at the killing[s] . . . and issued a warning that all hostilities waged against UN ‘blue helmets’ constitute a serious violation of international law.”[9] The 9,000-strong UN force, took over peacekeeping operations in July 2013,[10] and frighteningly, thirty peacekeepers have now been killed in Mali since the United Nations Security Council established the operation in April 2013.[11] Yet, international attention regarding these conflicts has been minimal.

The world has been consumed with the threat of ISIS, particularly with the recent battle for control of the Syrian border town of Kobane.[12] However, these recent attacks on UN peacekeepers illustrate the need to look at extremist actions beyond the anticipated Middle Eastern Regions. The UN Security Council was recently debriefed on global conflicts, including the Malian attacks. Malian Foreign Minister Abdoulaye Diop spoke to the UN Security Council stating that urgent measures were needed in response to the recent killings of UN peacekeepers.[13] In regards to the Golan Heights region of Syria and Israel, Lieutenant General Iqbal Singh Singha, Force Commander of the UN Disengagement Observer Force (UNDOF), stated the UN peacekeeping missions were further jeopardized due to the ongoing conflict in Syria, which has resulted in “an upward spiralling of violence.”[14] Singha also noted that troop contributing countries, such as Austria, have removed their forces from the region as the Syrian conflicts continue to rage.[15] These instances of conflict demonstrate the difficulty UN peacekeeping missions have in regions of conflict, regardless of the political and social reasons for the conflict. Without proactive measures for the UN peacekeepers, peacekeeping efforts will likely be halted and civilians further harmed. 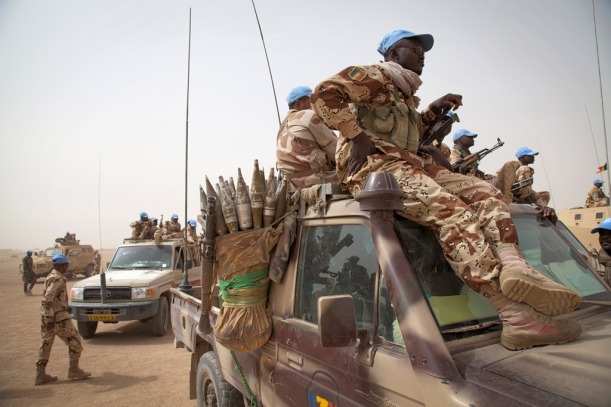 The difficulty now becomes determining how the UN and international community respond to the attacks, even if it is in the form of aid relief. “‘Force Commanders are operating in failing or failed States, where, frankly, there is no – or hardly – a peace to keep,’ Lieutenant General Ahmed stated, noting that the growing Ebola crisis had added yet another dimension of complexity to the UN military presence on the ground in Africa.”[16] In the recent Security Council briefing, Lieutenant General Carlos Alberto Dos Santos Cruz, the Force Commander of the UN Organization Stabilization Mission in the Democratic Republic of the Congo (MONUSCO) addressed the Security Council, stating, “the protection of civilians remained ‘a moral obligation.’”[17] However, the safety of UN peacekeeping forces, as well as civilians, should now be the primary focus.

Despite these calls for strengthened peacekeeping missions, there is still inadequate discussion on how to strengthen peacekeeping forces. For example, at the General Debate of the 69th Session of the UN General Assembly in September 2014, peacekeeping discussions were dwarfed in comparison to topics such as terrorism or extremism.[18] Further, the lack of discussion of peacekeeping efforts, particularly in Mali, reflect that the global community is more concerned with active conflicts in regions such as Israel/Palestine and Syria. Without discussion on how to improve and strengthen peacekeeping efforts, more harm will likely come to UN peacekeepers operating in conflicted regions. Hopefully the UN will respond to the Malian government’s request for heightened enforcement action in the coming days. The level of support offered to the stressed Malian areas should involve sufficient aid so that both civilians and peacekeepers in the region receive enhanced protection.

Natalie Krajinovic is a University of Baltimore School of Law J.D. candidate (’15), with a concentration in Business Law. She holds an Honors Bachelor of Arts in English and East Asian Studies from the University of Toronto, St. George. Natalie has always had an interest in international law and policy. While studying at the University of Toronto, she was the Editor-in-Chief of the Toronto Globalist, an international relations magazine with chapters across the globe. She currently serves as the President of the International Law Society and as the Comments Editor for the Journal of International Law at the University of Baltimore School of Law. Natalie is also a law clerk for John H. Denick & Associates, P.A., a business law firm in downtown Baltimore.