As we all know, the media is used to spread the most recent news and current events. What many people do not know is that the media have rules and regulations they must follow in order to stay on TV and/or the radio. Many rules that regulate the media differ from country to country. Although the U.S. Constitution’s First Amendment guarantees the right to freedom of the press, usually with minimum regulations, other countries, such as Bhutan, which will be explored in this blog, do not have such freedom.

The U.S. gives most leeway to print media, such as newspapers, magazines, and flyers.[i] The only real regulation for print media is to deter defamation. [ii]  Defamation happens when untrue information is printed that may cause harm to someone.[iii] Defamation can be either written (libel) or communicated verbally (slander). Broadcasting media are a little more regulated than print. 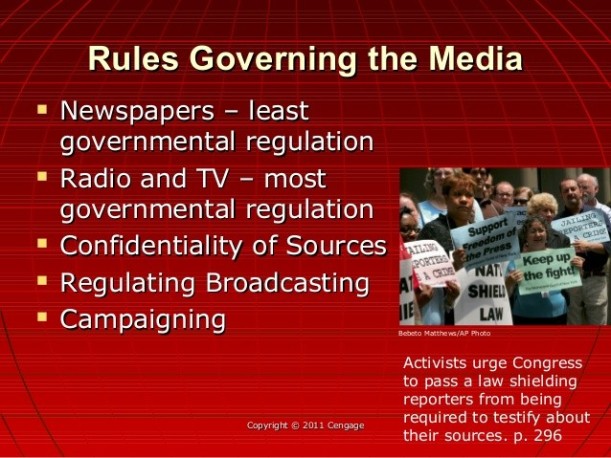 On the other hand, Bhutan has more restrictions on media outlets. Even though Bhutan claims to have a Constitution allowing free speech and opinion, Bhutan has an Act that prohibits criticism of the king as well as anything that may undermine or attempt to undermine the security and sovereignty of Bhutan.[vii] The government even restricts and censors topics that involve Nepali-speaking residents having to leave Bhutan.[viii] Many of the media outlets hesitate to push the limits of the regulations because the media depends on the government for funding and support.[ix]

Bhutan is a country that is far behind the times on Internet and television, both of which arrived in 1999.[x]  Even though Bhutan was behind the times, almost 10% of their population is on social media.[xi] Social media gives the Bhutanese an outlet to express their own opinions and views and changed the idea of criticizing the government, giving the younger generation an opportunity to have an opinion. [xii] However, due to the growth of social media and the presence of the population on social media in Bhutan, the government decided in 2014 to draft policy on the use of social media.[xiii]

The government agreed that a huge benefit of having a social media policy would be for the government to engage its citizens and officials in the use of social media to share government information as a developmental tool for social, economic, and political change.[xiv] Discussions concerning social media use in Bhutan have even led to the idea of incorporating curriculum in the schools to have a social media component.[xv] Even though the Bhutanese government may appear to support the idea of social media and is not trying to regulate social media, the government has created guidelines one must follow when using social media. These include the requirement to be accurate, to never post anything malicious or misleading, to respect the Constitution and all laws, and to act in good judgment.[xvi] These are many things that young people do not think of when posting their opinions.

Given an option between the United States and Bhutan, I would choose to use social media in the U.S. The U.S. may regulate TV, radio, and print, but it does not regulate it in a way that would affect one’s rights. The U.S. can write, state, or show on TV what’s going on in the government, even if they disagree with what the government is doing. On the other hand, Bhutan regulates its media outlets in a way that only shines light on the government’s positive aspects instead of the negative. The Bhutanese government does not allow its citizens to share their opinions if they disagree with what the government is doing. While beneficial to maintaining the status quo in Bhutan, this restriction of rights affects the rights of the media and Bhutanese citizens alike.

Raiven Taylor is third year law student at the University of Baltimiore School of Law and is completing her concentration in International Law. She has an undergraduate degree in Political Science from Bowie State University. She has studied abroad in London, England and Clermond-Ferrand, France. She is an Senior Staff Editor for the Journal for International Law as well as Secretary for the International Law Society. Additionally, Raiven is a Rule 16 student attorney in the Immigrant Rights Clinic. Her passion and interest in international law is human trafficking and international human rights law.